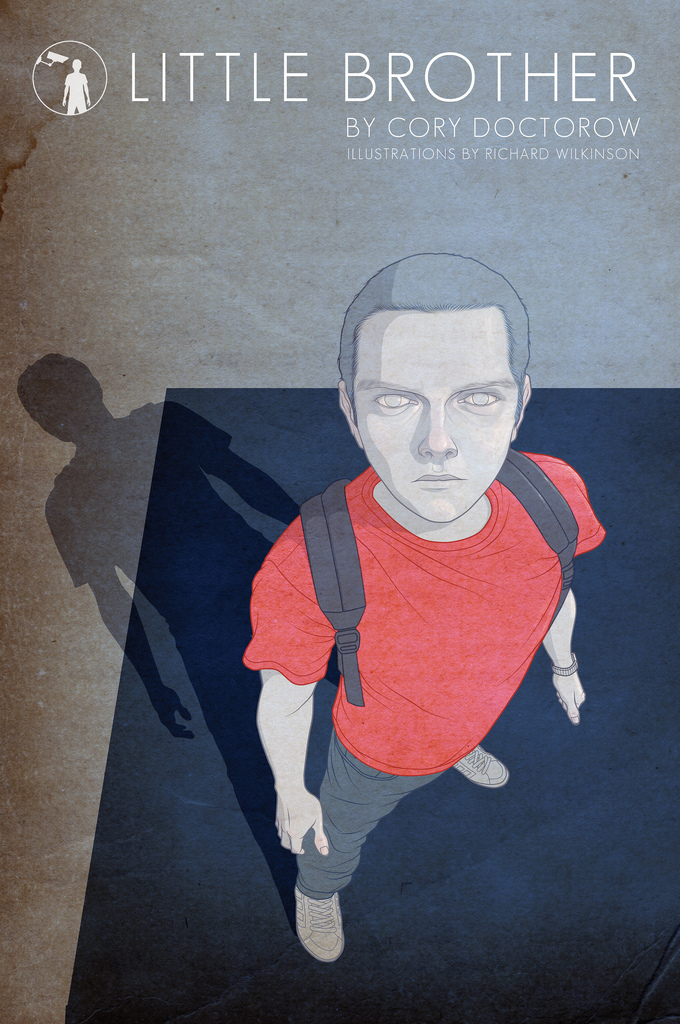 Cory Doctorow’s Little Brother (2008) bears relevance on our discussions in many ways. The protagonist, 17-year-old hackitivist Marcus Yallow, takes on nothing less than the Department of Homeland Security in a not-so-distant, post-terrorist-attack San Francisco.

Doctorow is a fascinating example of the intersections of literature and the internet. A major proponent of Open Access to all information, he initially published the novel with a Creative Commons Sharealike license and it remains available for free. Just as he makes no mystery of his belief in transparency and privacy, so he openly includes educational passages concerning his causes. The novel includes a number of descriptions that feel akin to documentation of a computer program (of a literary sort). He writes about the excluded parties in order to include his readers in his subversive movement.

Even the introduction to Doctorow’s published version on craphound.com includes a pedagogical instruction in the impetus of his movement. (Forgive the block quote, I’ve cut a bit, but I wanted to show the Internet history that Doctorow traces and how it aligns with the history of his activism):

“When my dad was a young university student in the 1960s, he was one of the few “counterculture” people who thought computers were a good thing. For most young people, computers represented the de­humanization of society. University students were reduced to numbers on a punchcard… Computers were seen as a means to increase the ability of the authorities to regiment people and bend them to their will.

When I was 17, the world seemed like it was just going to get more free. The Berlin Wall was about to come down. Computers ­­ which had been geeky and weird a few years before ­­ were everywhere, and the modem I’d used to connect to local bulletin board systems was now connecting me to the entire world through the Internet and commercial online services like GEnie. My lifelong fascination with activist causes went into overdrive as I saw how the main difficulty in activism ­­ organizing ­­ was getting easier by leaps and bounds …

But 17 years later, things are very different. The computers I love are being co­opted, used to spy on us, control us, snitch on us. The National Security Agency has illegally wiretapped the entire USA and gotten away with it. Car rental companies and mass transit and traffic authorities are watching where we go, sending us automated tickets, finking us out to busybodies, cops and bad guys who gain illicit access to their databases. The Transport Security Administration maintains a “no­fly” list of people who’d never been convicted of any crime, but who are nevertheless considered too dangerous to fly. The list’s contents are secret. The rule that makes it enforceable is secret. The criteria for being added to the list are secret. It has four­year­olds on it. And US senators. And decorated veterans ­­ actual war heroes.

The 17 year olds I know understand to a nicety just how dangerous a computer can be.

(Little Brother by Cory Doctorow is distributed under a CC A-NC-SA 3.0 license)

It is not surprising that Doctorow wrote the novel in the early part of 2007 and that the novel (which came out in 2008) ends with a political campaign. Yet he does write to an audience not yet eligible to vote, those who seek work-arounds and networks to feel less disenfranchised. Doctorow illustrates the transmissions of information and power that happen in internet interactions in a way that is engaging and persuasive.

Doctorow uses the narration to involve the reader in the workings of the internet. As Marcus describes setting up a new internet, his Xnet, he illuminates some of the darker workings of the system. It almost feels like a how-to manual. He gives you the sense that you, too, could do this. At the end of chapter 7, he offers a call to code. “If you’ve never programmed a computer, you should. There’s nothing like it in the whole world. When you program a computer, it does exactly what you tell it to do…It’s awesome in the truest sense: it can fill you with awe.” He gives inspiration and incentive. “Even if you only write code for one day, one afternoon, you have to do it. Computers can control you or they can lighten your work ­; if you want to be in charge of your machines, you have to learn to write code.”

Doctorow’s mission is manifold and the book’s critical and popular reception speaks to his agility: he sheds light on the spirit of his movement and invites readers to get involved.

My primary provocation is one about age:

How do we take the novel’s activist mantra “Trust No One Over 25”? One concern with the revolution made possible by internet technologies is that they upset the balance of structures of  education. Doctorow seems to use his novel to instruct his readers on the historical imperatives they might otherwise ignore. But what does it do to the progress of ideas and education (that tried-and-true top-down hegemony) that younger and younger generations gain computer literacy that outpaces their forebears? How do power structures shift? And how does this impact structures of government?

I recommend finishing the book if you haven’t!

Interesting notes beyond the assigned chapters —

The two afterwords continue the mission to open and educate young people in the areas of Doctorow’s activism. The essay regarding security by Bruce Schneier almost seems like a sales pitch for a fun and exciting career in security, and Andrew “bunnie” Huang‘s essay about hacking the xbox while pursuing his PhD at MIT is an endorsement of creative destruction and reassembly. In the context of a Y.A. novel, a genre perhaps more steeped in the tradition of overt instruction, these articles bolster Doctorow’s mission to increase transparency and accessibility. He does not keep his tech philosophies secret, but makes them accessible in the most appealing ways possible. He appeals to the desire to abolish oppression that is often felt most keenly in teen years.

citation: Little Brother by Cory Doctorow is distributed under a CC A-NC-SA 3.0 license